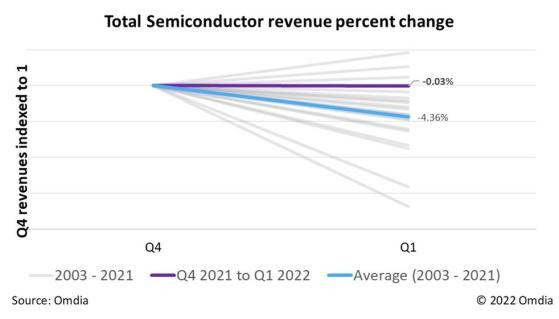 The fiery semiconductor market stabilized in the first quarter of 2022 after five consecutive quarters of record revenue growth, down just 0.03% from the previous quarter, according to Omdia's latest competitive analysis of the global semiconductor market.

"Total semiconductor revenue has been growing every quarter since Q2 2020 and has set a new record every quarter starting in Q4 2020. But the market broke that in Q1 2022. Two trends, ushering in the first decline since the first quarter of 2020," said Cliff Leimbach, senior research analyst and author of Omdia's "Semiconductor Competitive Landscape (CLT) Focus Services".

Furthermore, the decline in the first quarter of 2022 is low by historical standards. The first quarter is typically a declining quarter as demand weakens after the holidays. Since Omdia started tracking the market on a quarterly basis in 2002, the first-quarter decline has averaged 4.4%.

· Consumer spending was sluggish in the first quarter, especially for smartphones.

Continued impact of the outbreak on key markets in the first quarter, affecting supply chains for smartphones and other electronics.

About Omdia is one of the leading research and advisory groups focused on the technology industry. With clients in more than 120 countries, Omdia provides market-critical data, analysis, advice and bespoke consulting.