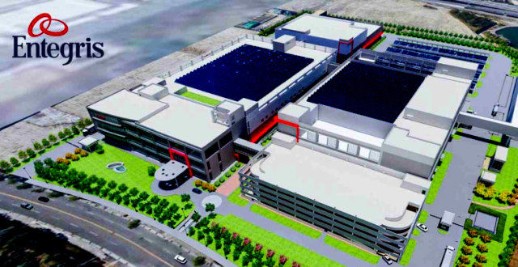 U.S. semiconductor materials maker Entegris is reportedly planning to more than double its investment in Taiwan, China, and build its largest manufacturing site to produce materials used in the 3nm and 2nm chip manufacturing process. Comments suggest that this is crucial for China's Taiwan region, which is trying to secure its place in the semiconductor industry chain.

According to Nikkei Asian News, Bertrand Loy, president and CEO of Intag and also chairman of the board of SEMI, said in an interview on Wednesday (8) that the company will invest $500 million in Taiwan, China, over the next three years, up from $200 million previously planned.

Meanwhile, the company is building a production plant in the southern Chinese city of Kaohsiung to supply TSMC and other companies, which is expected to start operations by the end of next year and mass production by mid-2023. The plant will produce filtration and deposition materials for the 3nm and 2nm chip manufacturing process, the industry's most advanced chip manufacturing technology.

Entegris is a top global supplier of high-end filters that are critical to ensuring the purity of the chemicals and fluids used to manufacture chips and displays. Such materials are becoming increasingly important as semiconductor manufacturing becomes more complex and less tolerant of impurities and defects.

The company's new plant in Taiwan, China, will first supply its largest customer, TSMC, and then support other chipmakers. Intel, Samsung, Armor Man, Micron and SK Hynix are among the world's leading chip suppliers that are customers of Entegris, Loy said, adding that the company will also spend $11 million to expand its technology center in Taiwan, China.

Loy emphasized, however, that the company's primary manufacturing base remains in the U.S., accounting for about 60 percent of the company's capacity, but hopes to create a more balanced production rhythm. "If you fast-forward to 2024 or 2025, I think the ratio of U.S. production to production elsewhere will probably be 50 percent and 50 percent."

Large chipmakers are undertaking their most aggressive expansion ever to help ease the global chip supply shortage. While some analysts and industry insiders have expressed concern about a potential oversupply once these expansion plans materialize, Loy said his company is not worried about short-term market volatility.

"Growth is never linear," he said. "I think the semiconductor industry will grow twice as fast as GDP over the next 10 years, and the market will reach $1 trillion by 2030. We need to be ready for that, and that means we need to add capacity." "We're not managing for the short term, we're planning for the long term."

Speaking of U.S. initiatives to introduce incentives for the homegrown semiconductor industry, including the $52 billion CHIPs Act, Loy believes that suppliers of chip manufacturing materials and equipment, as well as foreign companies investing in the U.S., should also be eligible for such support.

"This is a very global industry that relies on a very broad global ecosystem. I think the opportunity should go to everyone and should not be discriminatory." Looking back, we benefited from Korean incentives when we invested in Korea ... I understand that it may be a tough decision from a political perspective, but from an economic perspective, I think it's the right decision."